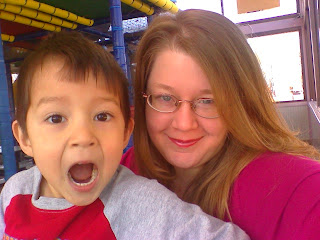 Aiden informed me this afternoon that he wanted to go to a playhouse to have lunch and play..so I said yes, he usually won't go unless his brother is with us, but AJ was at school. Aiden is really into having his picture taken, you probably notice I post a lot of him alone and with myself......lately AJ is just not wanting his picture taken as much..hmm.......could it really be? Could he be "Getting to that age" LOL I was dreading that....but I try to get him as much as I can.......anyway Aiden loves to be goofy in pictures, I always have to tell him, "ok, mommy wants a smiley picture." LOL So this is us this afternoon 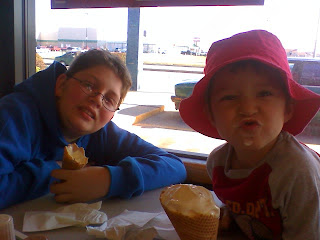 Picture is out of order here, but this was after AJ got home from school and down by the river, we all went out for ice cream, I skipped the ice cream though. Gotta love those sticky faces. LOL 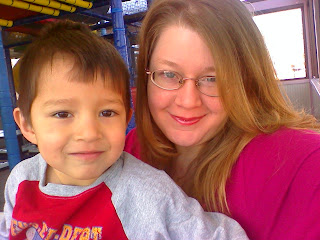 This was the "smiley" picture I wanted and got. LOL 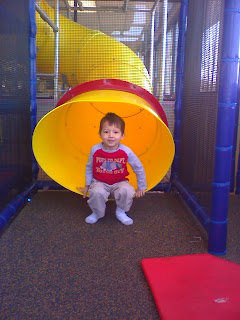 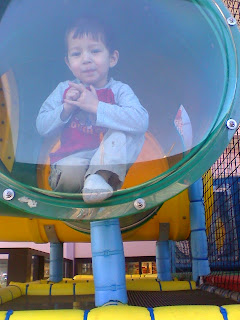 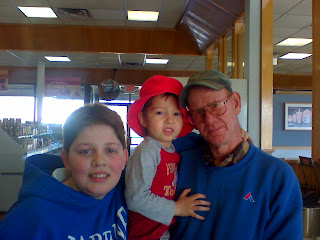 Got this taken when we went for ice cream. My handsome boys with my dad. "papa" 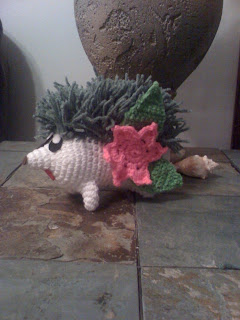 After doing Aiden's Pickachu........AJ wanted a Pokemon Shaymin......so I started that this morning, and finished him up tonight, surprisingly he worked up really fast. 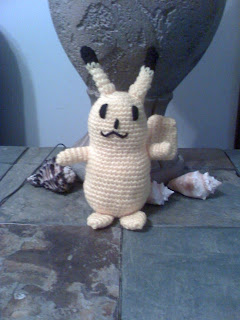 I am not happy with how Pickachu came out, but Aiden insisted on having the eyes mouth, and nose done just like the pattern, except he did not want pink cheeks......LOL 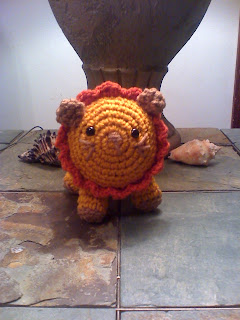 I also made this the same day I did Aiden's Pickachu......I had gone to Hobby Lobby and picked up a Vanna White Amigurumi book of animals and Aiden wanted the lion..........I did this while watching NCIS. it is cute. 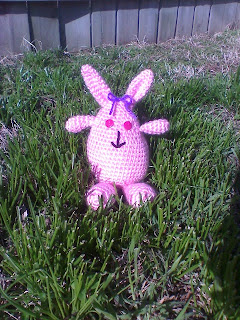 I haven't done much in the way of Easter Crochet, but I did this bunny in a couple of hours the other night, and was able to find a sunny green patch of grass to have her picture taken......she is done in Simple Soft Pink yarn, and has buttons for eyes, even added a purple bow to her.

Well all in all in busy but really fun day........
Posted by Dragonflymom 3 comments: 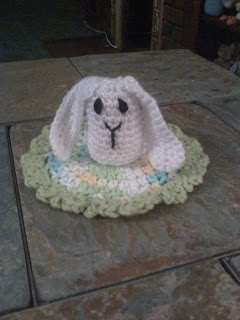 I have decided that I am taking a break from squares.......which I have been working on for a month now.....with the CAL starting soon, I thought it was best I take a break from them, so I am not ready to throw out anything that resembles a square. I really need to get busy with some Amigurumi. I made this cute little bunny that Caroline designed...if you click the picture it will take you to her blog and the pattern. I forgot to take a picture of his cute tail.........maybe I will remember tomorrow. He worked up in about 15 minutes.........I used a thin white yarn I had from sooo long ago.......not sure what the yarn is, but it is thin..........and I used an "E" hook........I also started another bunny, and I finished the body, but will finish him tomorrow, too tired now to do it.
Today was not too bad, but I woke up really sore from all the cleaning I did Sunday, and I still have cleaning to do. I decided to not clean today.........I didn't get much accomplished at all today, but that is ok........I did manage to make it to the gym......but I started out on the bike, and the stupid seat kept rocking a bit, so that hurt my back, after 10 minutes could not take it anymore, and did about 15 minutes or so on the treadmill, then a few of the weight machines.........I was sore, tired, and sweaty....time to go home............I gave Aiden a bath early, and woohoo both boys fell asleep before their bedtime!!!

I just relaxed and watched some tv, and didn't pick up a hook at all today except for tonight, about an hour ago is when I finally picked my hook up and made the little bunny above and started another pattern. Will post pictures of that tomorrow.

Weather is getting nice, but we may get some rain later this week, so tomorrow I am going to try to take Aiden to the park.
Posted by Dragonflymom No comments:

I am starting a CAL in one of my groups, it will be the 63 Easy pattern Stitches to crochet, to make an heirloom afghan.

I have had this book for awhile now.....but never really got around to starting it, tried a few times, but didn't finish.......this time I would like to......in my group we have a cut off date of 12-01-2010, some will be doing more squares a week than others, but the fun is doing it together and seeing the progress. You don't have to join my group to join in.......I will post on Monday's the progress of this 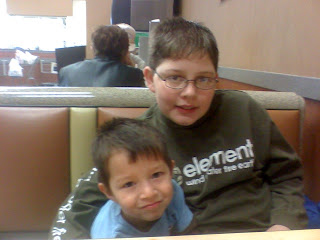 Aj finally went and got his hair cut..this was right afterwards, I think he looks handsome and much better now 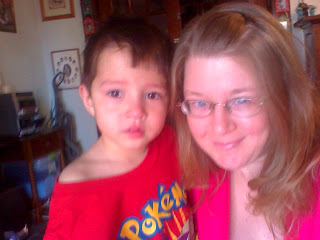 I don't remember why Aiden had been crying....but I had to snap a picture, was hoping it would cheer him up 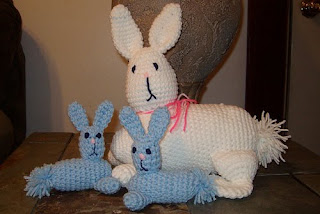 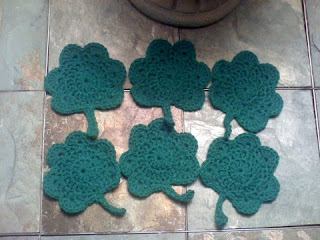 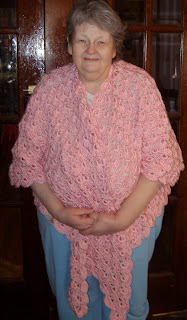 I finished this in about a week I think, I had taken forever to weave in the ends but it is done and I gave it to my mom, which she was super happy about........here she is above wearing it. 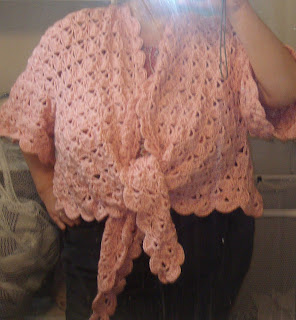 I tried to get decent pictures of me wearing it, but didn't work out.........here I am in showing it tied .
Posted by Dragonflymom 4 comments: 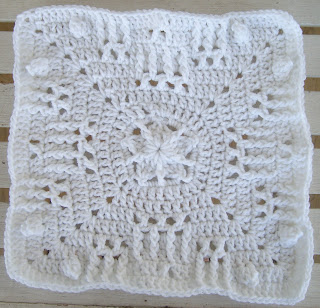 This square above is a 12" one I designed Thursday evening while watching the Olympics, I have been making an afghan for my father, who has informed me more than once that I have not made him a blanket, which is true, so I quickly got started on one, thinking he would let up, but he hasn't, and I know he is just being silly, but I had the idea to use my own Popcorn Delight square after much looking online as to what square I would use.........duh!! I designed a 12 Popcorn Delight square last year, and so I started using that, but wanted more, I had been wanting to design one to "dedicate" to my parents, so above is what I did, it came out fairly quickly and uses a variety of stitches.... Well then Aiden wanted a square designed for him too but with a bigger star, so I got started on that I believe Saturday evening........it's done, I had to do two, the first one was all wobbly looking......so I took the basic idea and "tweeked" it, and came up with a better one, which ended up giving me another idea of a square, so last night, I sat down and started another 12" square, and this one came out of my hand really fast.........I knew the idea I had, and it worked out well, I didn't even stop to write down each round, I did that after the square was done, and I am in love with it, LOL it came out so pretty, and has hearts in it, I have wanted to do a heart square for awhile now, but every design I came up with didn't end up looking right. So anyway I will do another square today and check for errors in the pattern, then get some testers........so 3 squares 12" ones done in a matter of a few days!!! WHEW!!! 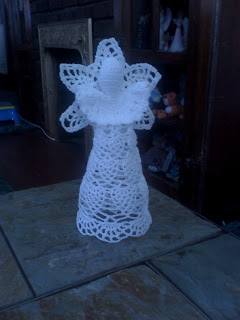 This angel was done for a swap in January, and I had not sent it off to my partner yet, because the group owner said not to as she was having personal issues.......so she finally sent me her swap last week, completely disappointed in what she sent me, it was totally off as to what was to be made........What she did was decide that she was soooo late in all her swaps, that she will just make something small and off the mark and hope I would not care, but I did......she was the first one to join this swap, and she knew what the swap was, and to send me what she did, was really annoying........I was really disappointed and it certainly helped me into thinking I need to steer clear of swaps for awhile or at least with people I don't know well..........she even tried to guilt me, as she pretty much knew I was not happy with it, I didn't say I wasn't, just emailed saying I got it and I think it was from such and such swap........I was not going to feel guilty. Anyway needless to say she will not get this angel, it is being sent off as a prize. 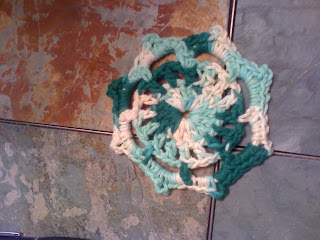 I tested this coaster pattern from Chars, and if you are interested in this coaster you can visit her Etsy shop HERE.

The winter olympics are now over, I watched the closing ceremony which was awesome. I already miss watching them.......not sure why I like watching them so much, it use to be just the figure skating I liked, now it's most of it. I will say that some of those athletes are very sore losers, and some I just feel sorry for.......there is one country in particular which has some really great athletes, but it is a shame that these countries and coaches practically "threaten" or scare them into winning at all costs!! Everyone there was there because of hard work and determination, they were all really great, and I applaud most of them.....but it's a shame that a person that clearly has a lot of talent, can't seem to lose without being a sore loser about it.

Well I am off to finish cleaning and working on a couple of squares.
Posted by Dragonflymom 2 comments: