We have another storm coming in, this time they say its only snow. I hope we get a lot of it, because I LOVE snow. I would love to have enough for the boys to be able to go out and play in it.....love having snowball fights with them. LOL Anyway its been a hectic week, Monday evening, AJ came home from playing across the street and ate dinner and shortly after that, he got really sick, he got hit with the flu big time..........he was up all night sick sick sick, I had made my mind up that he was not going to school the next day, but then found out school had been cancelled due the ice storm we were getting. Tuesday he woke up with a high fever, and had that for most of the day, so Wednesday he did not go to school either, but by Wednesday afternoon he was feeling much better and no more fever, so he went to school Thursday. Aiden still has a cold, so I am taking him to the dr tomorrow, he has had this cold for over 3 weeks, which is too long for me and he also had one before this one, and i don't think a full 2 weeks passed before he got hit with this one. My mom also has a drs appt later today as well..........I can't sleep, my stomach is upset and I have a bad case of the yawns......I think after this entry though I will try again to go lay down. Have to be up early this morning.

Well I have been working on Christmas crochet and here it is. 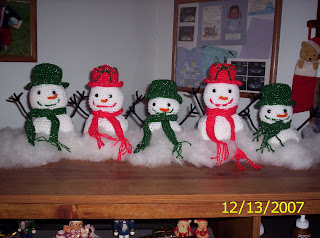 I just finished these and man I am in love with them. They are so darn cute!!!! This is my "Snowman" family. from the left is Papa, Mama, AJ, me, and little Aiden! The boys are done in green, and mom and I are in red. Way too cute!! I used orange pipe cleaners for the nose and black pipe cleaners for the arms.........the pattern called for crocheting them, but to me this looked more like a snowman. I went through several patterns that i just didn't like, so would frog them and start on another pattern, finally found this one online and tried it, and of course liked this pattern. I am working on Santa now. 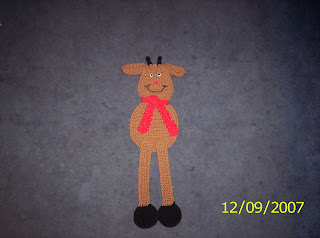 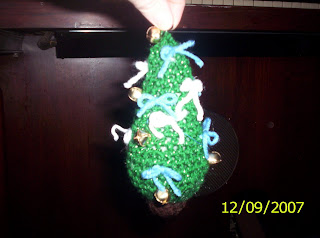 A small christmas tree, i decorated with bells and bows. 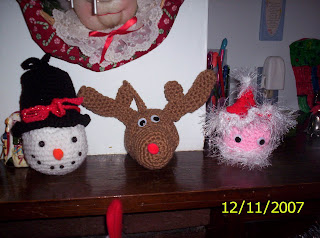 These are tree ornaments, and are cute too, although I don't really care much for the Santa, I don't know what was up, but the hat does not look like a Santa hat, but i didn't want to go searching for one that i liked. He is cute though, and they are all on the tree.
Posted by Dragonflymom 2 comments: 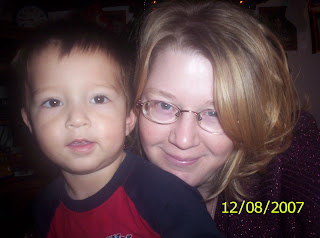 My handsome Aiden and me today. 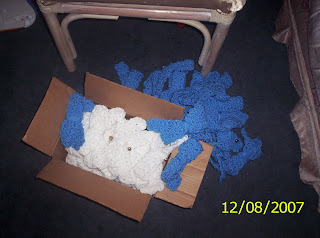 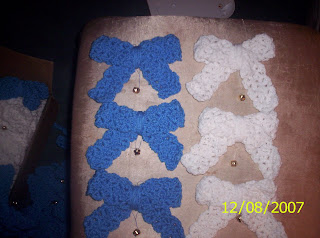 You can see the bells in this picture.......I really like bows and loved this pattern, it was very easy!!! 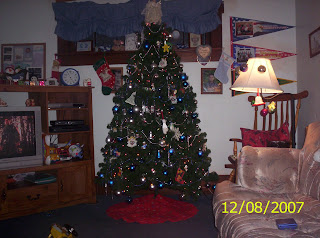 Before the bows were added to the tree, I had to spend an hour today "fixing" the tree, I threw away some christmas balls we bought last year, they had this thread on them that was coming off big time, and I didn't like that. So got rid of them and put the rest of the ornaments that had fallen off the tree and were under neath it, I had to pull the tree out from the wall, to put beads on the tree, silver and blue. I got the beads yesterday, and you can't really see in this picture, but they are there, and look pretty 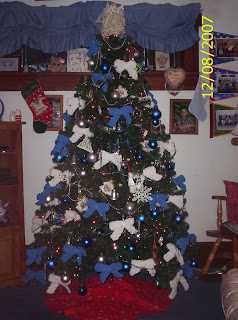 After with the3 bows on the tree, Aiden helped me put them on!! LOL AJ was too busy in his room playing on his DS with a friend of his..........so Aiden and I did it. I really love these bows on the tree, I think I could have made them a bit smaller, but I like them this size! I spent a fortune a few years back for store bought bows, that came apart really easy and were a pain!! I thought why buy them at those outrageous prices and have them fall apart, when i can make them for much cheaper and they look better. LOL

Its been a tiring day, I still have the cold that won't leave me alone, and had to fix the tree then clean the living room, move all the furniture to vacuum under them. Luckily Aiden took a nap and I was able to get a lot done while he was sleeping. PLus put up a few more decorations we had...........of course I am off to make more Christmas stuff. 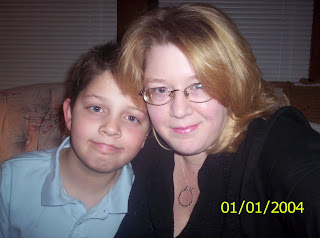 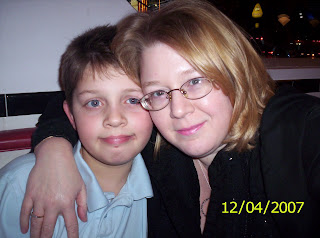 I missed AJs graduation from D.A.R.E yesterday!! How could i forget to go? Between feeling sick and stressed, it just totally slipped my mind! I felt horrible, and didn't remember until AJ came home from school and i saw him wearing the shirt he got. He said he was ok with it, but i knew he was bummed, and so was i.............Tuesday he had his Christmas program at school, and not only did he play his instrument....Viola, but he had a speaking part in the program, I was beaming with pride when he was up there. I saw my handsome boy up there doing such a great job! I was so proud of him. I thought my face would break i was smiling so big! LOL After that we went out to eat and had a nice time. He came home and played for mama since she could not make it.
Essay for Dare

D.A.R.E has taught me so much about not using drugs.
Like it can make you very sick and kill you.
It can also make you do things that can hurt you or others that you care about.

D.A.R.E taught me about tobacco and if you use a lot of it when you are a kid,
it can cause cancer in your mouth. They might have to remove your bottom jaw.

I promise not to use drugs in my whole life.
I will not use anything that can hurt me like alcohol, tobacco and marijuana.
If one of my friends were using drugs, I would tell them to stop
and that it can hurt them or kill them.
I would not want them to die.

If my parents used drugs I would tell them
find the right medicine to help them stop using drugs.
I would ask them to get help for their problem.
I would tell them how much I loved them and don't want
them to be hurt by using drugs and stuff that can hurt them.

D.A.R.E is the best program out there to help make us safe and healthy.
They are there to help us and that makes them cool in my book.

Well what an essay huh? I am really proud of him for writing this.

I am still feeling awful and hope this cold and virus leave me really really soon.

I am off to wash my hair and relax. My little Aiden is still sleeping, he is a tired little guy!
Posted by Dragonflymom 1 comment: 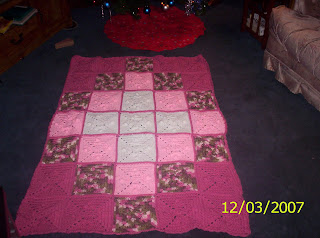 Well its done, and I am really proud of it. I used the colors, Raspberry, Camo Pink, Petal Pink, and White, I also really like how the pattern came out. 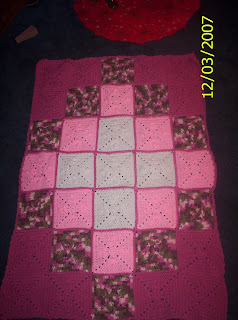 Another shot of it.............This pattern is hard to see, but the squares are actually, "Buttons and Bows" and are really pretty.

I am not feeling too good again, my cold is getting worse and my whole body aches, not to mention feeling sick to my stomach and my voice is cracking throat hurts like crazy, so I am off to crochet some bows for the christmas tree, and relax some.
Posted by Dragonflymom 1 comment: 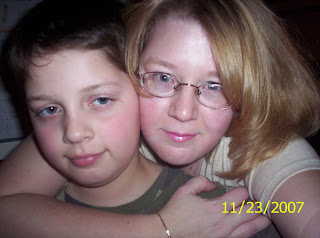 My very handsome AJ and me 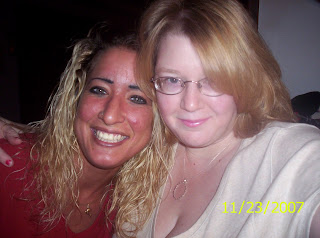 Karen, my sister-in-law and myself 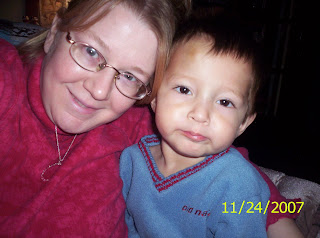 My little handsome guy, Aiden and me 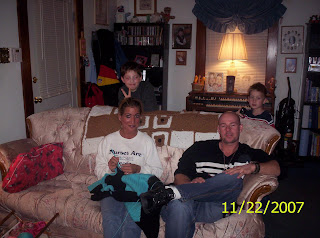 Karen, my brother, Aj and Dylan 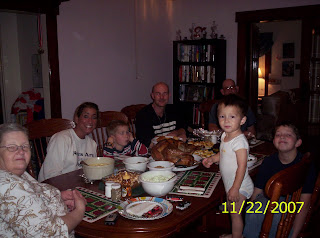 all around the table 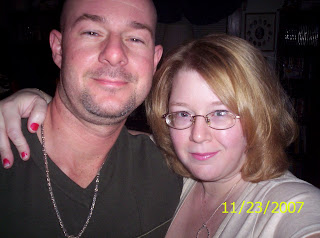 My brother and me 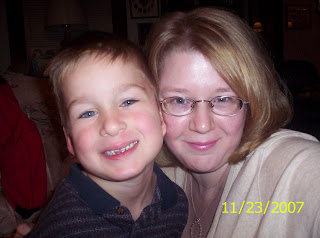 Ok , I know I have been very quiet lately, I am very sorry, but things have been so busy around here since Thanksgiving, and then this past week, I have been very sick, first little Aiden got an awful cold which he still has, then AJ got it, and then me...........and I had a headache for days last week, and could not shake it. Finally got rid of it and I am hoping it does not make another trip my way!! LOL.

I hope everyone had a great thanksgiving............We did.......my brother and his wife with my nephew came up and they got here Wednesday evening.............I had a heck of a time running errands Wednesday, but managed to get it done and home before they got in.. We had decided on chilli for dinner, since it had turned so cold outside, and that way they would have a hot dinner waiting for them. My sister-in-law just started to crochet, so we had loads to talk about.........she crocheted the whole time they were here...............making my brother a black and turquoise blanket. We had 3 boys running around, my nephew, Dylan is 5 and the cutest..................all the boys got along really well for the most part, which is always good. Thursday rolled around and we were getting last minute stuff done. Most was done the night before.....................we had gotten snack trays to snack on but decided to take the boys to a play house to play for lunch, so we could get some stuff done. Dinner was great! We were able to get everything done early and so we had time to relax until dinner time............turkey came out really good. Later that night we rested up and Friday came and we all just mainly lazed around.................but did put up the christmas tree, and it was really nice to have my brother and his family there to help with the tree, really made it special, and they are hoping to do this every year, so that will be great!!! Anyway, Friday night it started to snow, which Charlie and Karen were hoping for snow, and we got it. Saturday morning rolled around, and they were getting the car packed and before the snow melted they all had a snowball fight, us against the kids!! Kids won!! LOL Aiden mainly just watched and laughed at us. Rotten stinker.!!!

Then really this past week was just cleaning up a bit, and trying to relax, but then getting sick made it worse and I had a ton of errands to run................did a bit of christmas shopping last week, and am actually feeling better.

It rained today, and was actually pretty warm out. AJ went out with a friend, so I and a friend took her son and Aiden to McDonalds playhouse to play, and it was so crowded, everyone had the same idea! LOL

I am done with my living room Afghan, just haven't gotten around to taking pictures yet.

Tomorrow I am hoping for another relaxing day.
Posted by Dragonflymom No comments: