Well this is my 3rd entry for the day, but I am trying to play catch up, both on aol and yahoo..........been neglecting a few things! LOL Today was so nice out, the boys and I went on a leaf hunt, I want to make some crafts with them using leafs. I can't believe the month is almost over......Anyway the boys played outside for most of the day and I am beat, will work on some swaps I am in.....below is an update on my WIPs 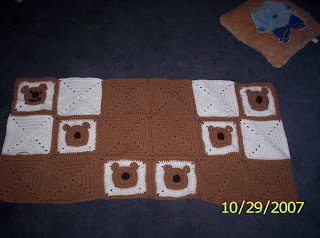 This is Aiden bear ghan........I have not put faces on all the bears yet, will do that when I am done with it...........this is 3 strips so far.........I am alternating between my swaps and this afghan and the one below, will do a strip on one then work on the other one. I did have this in alternating squares but decided on a different pattern........ 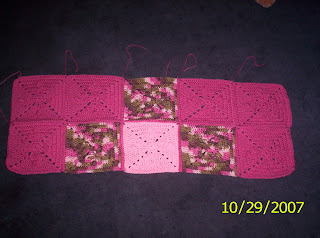 This is for a lapghan for the living room..............two strips done and will work on the 3rd one tonight, since I just added the 3rd strip to the bear one. 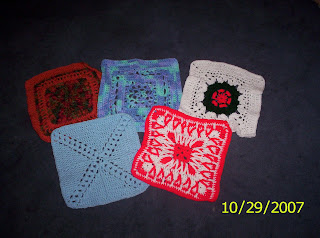 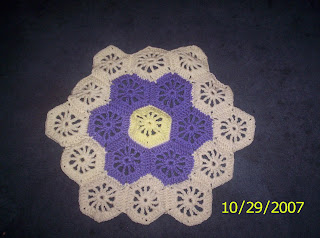 This is my first set of "Grandmothers Flower Garden" afghan...........these are a PAIN to put together..........very tedious if you ask me.............I am debating on whether I really want to put the others together!! If anyone has any suggestions on putting these together any easier........please let me know! LOL 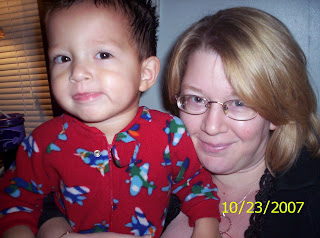 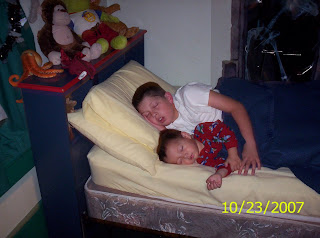 I guess they were worn out from Monday and Tuesday....... 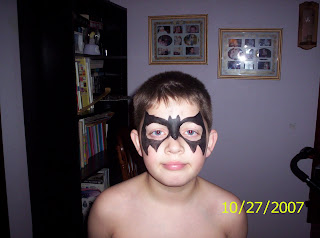 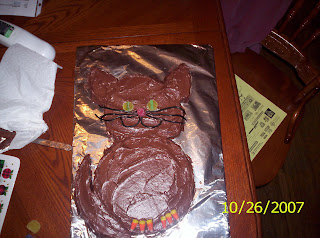 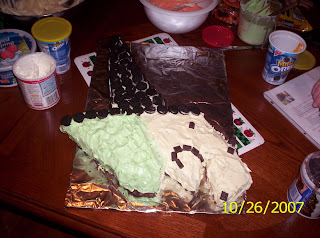 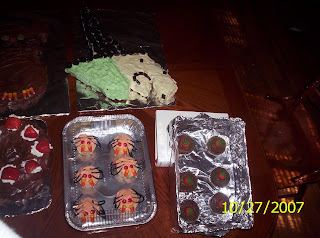 These are spider cupcakes and pumpkin patch cupcakes very cute but you can't see them very well. 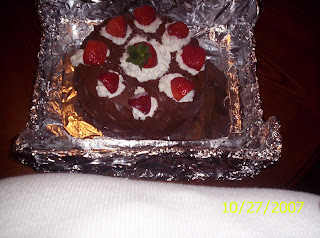 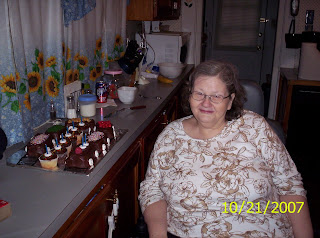 My mother in front of the train cake she made for Aidens Birthday. She loves making cakes and did a really good job on this cake. Aiden LOVES trains and this was really cute. Last year she made him a teddy bear cake which was adorable!! 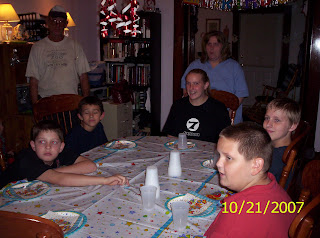 Here are some of the people who were there for his party........the party went really good, we all had a great time, it was nice just visiting and have fun. Aiden had a nap right before his party, so once he was awake, he was having fun and maybe not too sure about all the people around, but had fun anyway. 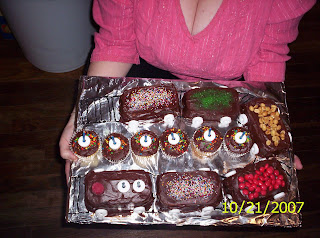 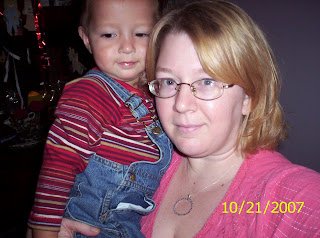 my precious Aiden and mommy 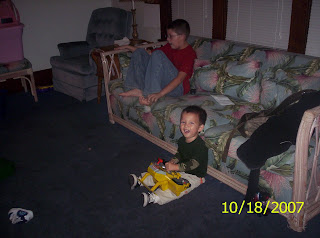 My father bought this for Aiden at a garage sale, its one of those construction drive things, and Aiden just loves it, he will give it to someone saying, "Drive" and you better drive!! LOL 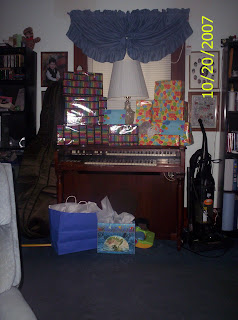 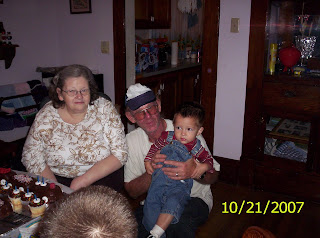 My parents with Aiden!
Aiden got a lot of Little people stuff, and a work bench........i can't remember everything he got, but he did get a lot and loved pretty much everything...........he loved the cake and ice cream and i loved when the party was over, even though i was having a good time, it was time to clean up and relax.........it was a busy day! and we all had fun.................all the kids kept trying to play more with Aidens toys than Aiden himself. LOL 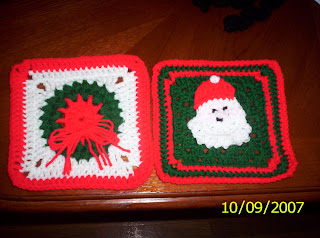 I did these for a christmas square swap, they are both 7" and came out really cute! I hope the lady i did them for likes them............i have not sent them off yet! Will do that Monday. 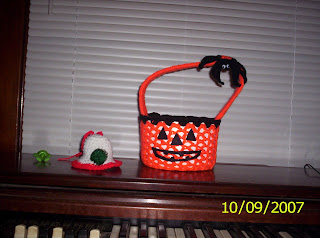 Ok these are my goodies..............I got the bell for a ornament swap I was in in a crochet group. I love the bell so much, and plan on crocheting some for the holiday. The Halloween basket is just too cute and check out that spider!? Cute huh? Lisa from Crochetmania made this for me, and I love it its adorable, it already has some candy in it. 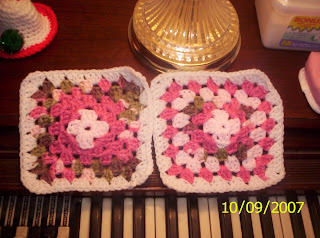 These comments were made in 1955

"I'll tell you one thing, if things keep goingthe way they are, it's going to be impossible to buy a week'sgroceriesfor $20."
"Have you seen the new cars coming out nextyear? It won't be long before $2000 will only buy a used one."
"If cigarettes keep going up in price, I'm goingto quit. A quarter a pack is ridiculous."
"Did you hear the post office is thinking aboutcharging a dime just to mail a letter?"
"If they raise the minimum wage to $1, nobodywill be able to hire outside help at the store."
"When I first started driving, who would havethought gas would someday cost 29 cents a gallon. Guess we'd be betteroff leaving the car in the garage."
"Kids today are impossible. Those duck tail haircuts make it impossible to stay groomed. Next thing you know, boyswill be wearing their hair as long as the girls."
"I'm afraid to send my kids to the movies anymore. Ever since they let Clark Gable get by with saying 'damn' in'Gone With The Wind,' it seems every new movie has either "hell" or"damn" in it.
"I read the other day where some scientistthinks it's possible to put a man on the moon by the end of thecentury They even have some fellows they call astronauts preparingforit down in Texas."
"Did you see where some baseball player just signed a contract for $75,000 a year just to play ball? It wouldn'tsurprise me if someday they'll be making more than the president."
"I never thought I'd see the day all our kitchenappliances would be electric. They are even making electric typewritersnow."
"It's too bad things are so tough nowadays. Isee where a few married women are having to work to make ends meet."
"It won't be long before young couples are goingto have to hire someone to watch their kids so they can both work."
"Marriage doesn't mean a thing any more; thoseHollywood stars seem to be getting divorced at the drop of a hat."
"I'm just afraid the Volkswagen car is going toopen the door to a whole lot of foreign business."
"Thank goodness I won't live to see the daywhen the Government takes half our income in taxes. I sometimes wonderif we are electing the best people to congress."
"The drive-in restaurant is convenient in niceweather, but I seriously doubt they will ever catch on
There is no sense going to Lincoln or Omahaanymore for a weekend. It costs nearly $15 a night to stay in a hotel."
"No one can afford to be sick any more; $35 aday in the hospital is too rich for my blood."
"If they think I'll pay $1.00 for a hair cut,forget it."
Posted by Dragonflymom 1 comment:

Tuesday is Off to a Good Start 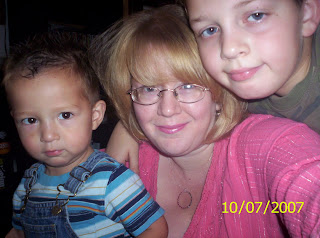 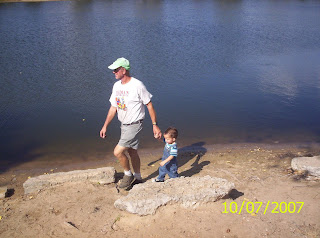 Maybe I spoke too soon.....Aiden was playing, but now is whining, he wants to go outside, but I am not ready to go hopping outside its chilly out there.......

I know I have been lazy about writing in here......I had a good weekend, Sunday we spent the day at the park, it was for a birthday party for Chris, we bbqed out there and had a lot of fun.......it could have been less windy.........we had to stop at WalMart on our way home....and I looked at AJs feet and they were dark brown from all the dirt on them.......I told him to go to the bathroom to wash his feet off then a bath when we got home. Then I looked down at my feet, (we were all wearing flip flops) anyway they were dirty too!! ewwww......had to go wash my feet off too. The bathrooms were really dirty and this one mother was talking to her small daughter about how WalMart was too stupid to clean their bathrooms, then made a comment that people were too stupid and filthy to flush the toilets, and disgusting people were, and this went on and on, then they got out of the stall and walked out without washing their hands!! LOL I had to laugh at this woman, who thought she was so superior........listening to her whine about how dirty everyone was........then to walk out without washing their hands, must not have been dirty enough for her to teach her daughter the importance of washing hands, especially after using such a dirty bathroom........I thought i was done hearing her, but she was over by shampoos and her daughter picked something up from the floor, and she gave her yet another lecture about how dirty it could be, you don't know what filthy person that came off of! WOW.....talk about good teachings! LOL I am really glad Aj has not gotten sick......this stomach virus is really hitting people! I will get on later and post some more, the computer is slow right now, and I want to work on some crochet.
Posted by Dragonflymom No comments: 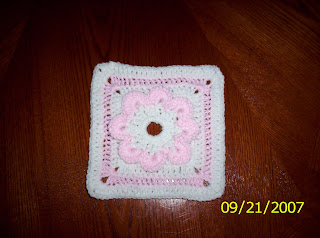 Ok so its been awhile since my last entry, but been busy............anyway above is a square I did in white and Powder Pink, which the pink was hard to find, not sure why, i remember buying it from WalMart awhile back, but this time I just had trouble finding it. Finally did though and this is a square I did for a Choose Your Color. I almost didn't want to part with it. 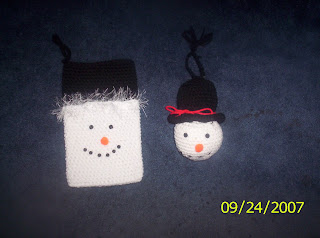 These are my snowman, the snowman stocking is very cute, and the snowman ornament is for a Christmas ornament swap I am in..............but I have noticed I put the noses on crooked!!!!! UGH, my mom says he was in a fight........maybe they fought each other!! LOL I was trying to get the noses off, but they were having none of that. I think they are cute anyway. 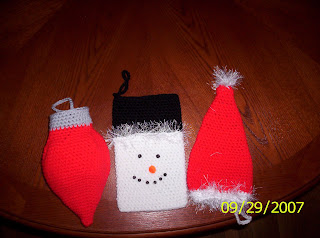 Here is the snowman stocking with a X-mas light bulb stocking and a Santa Hat Stocking, all came out very cute and worked up very fast...........I did all these in about an hour. I hate working with fun fur, I love how it looks, but its a pain working with it. Well i will add more later today. My hands are getting cramped.