Well today was busier than I wanted it to be, but the day went well.........AJ was checked by the school nurse when he went this morning and found NO bugs........thankfully. I finished up the laundry, well ok, I still have more to do but the main stuff got washed. I also sprayed again, just to be on the safe side.........

My mother is so happy, I went and got her a new cell phone.......she has had her old one for some years now, and it was not working right. So she is glad she doesn't have to use that anymore..........but now I have AJ wanting a cell phone too, which I think is too early! He doesn't seem to think so........tonight he was making a list for me of things we needed and stuff, and when asked why he was doing it, he told us that he was trying to be responsible, and not a lazy bum.......now I don't know where he got the idea of being a lazy bum, I have accused him of being too lazy playing games, but never called him a lazy bum.......LOL.......so I tried not to laugh at him, since he was trying...........but I told him no cell phone right now.........I think I will cave eventually, but I am going to hold out as long as I possibly can.......my mother is not helping, but telling him she thinks he should have one. LOL........

I have decided that I am steering clear of swaps for awhile.......I have much too many projects here at home I need to get started/finished..........so I will stay in the one monthly swap I am always in, but no more for now. I also have some ideas for new designs, one an amigurumi pattern, squares, and a few other things.

Well we are getting more cold temps again and maybe some more snow/rain mix later this week. UGH..........I love winter, but getting just a dusting is a waste to me.......

Anyway I will post some pictures of some things I have been working on tomorrow, but for now I am super tired!!!
Posted by Dragonflymom 1 comment:

I have been watching the Olympics since they started and the Free Dance in figure skating was just awesome tonight, all the couples did a great job! Canada took Gold, USA took Silver and Russia took Bronze...way to go!! I love the Olympics and the winter is my favorite.

I finished the Zen Jacket and as soon as the ends are weaved in I will take a picture of it. 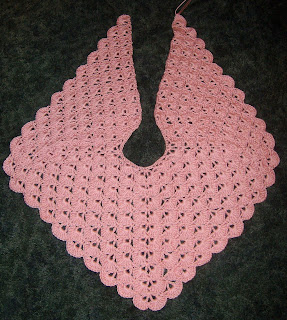 Here is more of the Zen jacket I am working on.......I kept thinking it was a shawl, but its a jacket here is the LINK
The yarn I am using kept tangling and knotting up really bad last night.........I tried my darn hardest to untangle it finally got he scissors and cut cut cut, and man got so darn pissed in the process, I mean I was actually yelling at the yarn.........LOL pathetic I know. I even had to frog the jacket twice, and finally after having to frog a third time, threw it in the trash..........pulled out a bunch of rows and chucked it in the trash, luckily I had already taken out trash and nothing was in there...........so I calmed down, read an email about the pattern, and realized I kept messing up because I was not paying attention to the pattern!! reading the wrong instructions. LOL.....so got it corrected and now its smooth sailing, but I think from now on I am going to roll the yarn in a ball before using it.......it doesn't knot or tangle on me. at least not yet anyway. LOL When I worked on it some more earlier today, that ball of yarn did not tangle at all. Woohoo, I put it aside to finish a pattern I was testing for Allisha 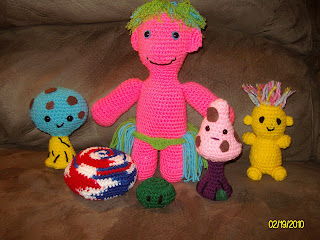 Amigurumi Troll and Mushrooms, cute huh? I have a friend who wants this, as she loves the trolls and the mushrooms.
Posted by Dragonflymom 3 comments: 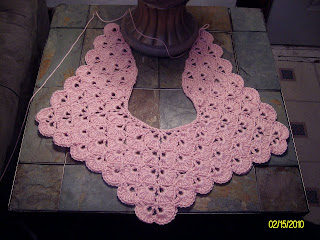 This is a Zen Jacket, well the starting of one.......it is a Crochet-a-long in a group, this is the first 10 rows, I started last night during the commercials of the Winter Olympics...I love watching them...........and did 6 more rows today........I like how it is turning out, but the pattern calls for an "I" hook which I hate using.......and I am using Caron Simply Soft yarn. Besides Scarves this is my first crochet "wearable" LOL 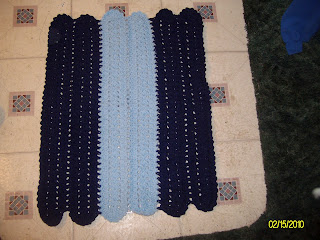 This is the other CAL I am doing, I had to add another strip since I goofed and put them in the wrong order. LOL I am going to be starting on another one in Pink Camo and Raspberry, have you guessed what this could be yet?
Anyway I am going to finish watching the Olympics and crochet during the commercials.
Posted by Dragonflymom 5 comments: 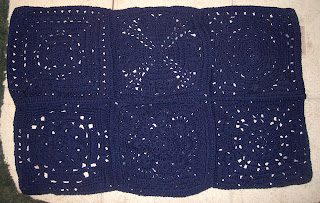 I am starting on two afghans for the boys, both will be the same, but will be different in how they are laid out. Up top here is AJ's, the center of his is in soft navy and will have a light blue around it.....these are squares from HERE So far 6 months of squares are done with AJ's 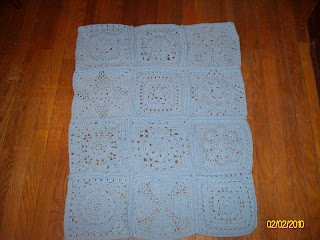 Picture was taken upside down!! Just realized that.

This is Aiden's, I want to get AJ's center done before working on the outside, not sure what design square I will use for the outer edge though. I also have another afghan I am working on for Aiden. It is the one I need to replace in RWB. 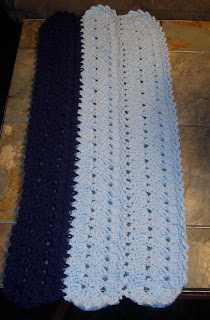 This is the starting of a CAL in my Ami group, can you guess what it might be? LOL I started this tonight.
Posted by Dragonflymom 2 comments: 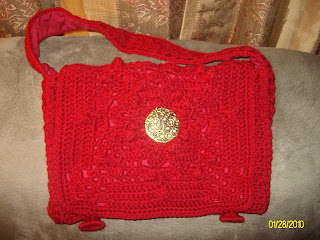 I got this purse from Barb, for Member of the Month in my Ami group, and she used one of the Squares I designed for the flap of this purse, it is lined and oh so pretty!!! 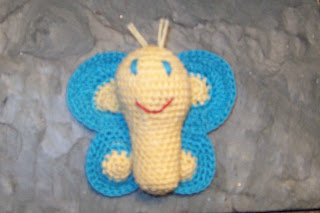 Made this tiny butterfly in thread for a prize in my Ami group. 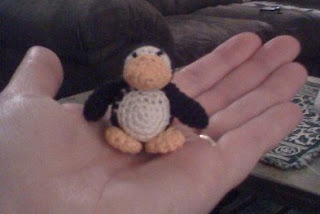 Not sure if I posted this Penguin, but this was made in thread as well for a wish box 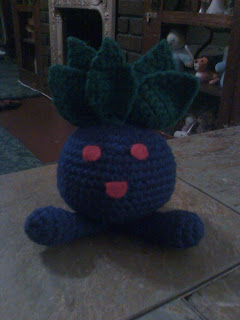 This is an Oddish Pokemon and you can find the pattern HERE, I did him for a prize in my Ami group. 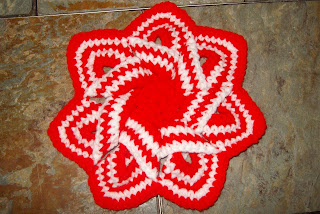 This is a flower petal hotpad, I love it and it is really easy to make. This was for a Valentine swap. 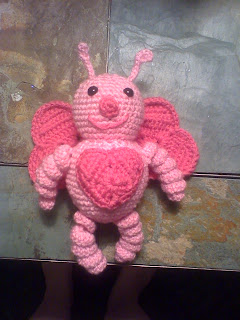 I also made this love bug for a Valentine swap, this came out really cute, and I wanted to keep it, but had to mail it off.
Posted by Dragonflymom No comments:

Well I am finally getting around to posting this video of Aiden playing catch with papa...they wanted me to come out and watch, so I took a video....Aiden loves to watch himself on video doing something......so I guess I need to take more videos, especially since my camera takes them with sound. LOL....he loves playing catch. He went out today to throw snowballs, but too darn cold to take a video, and they didn't last long out there anyway........the temps dropped throughout the day......we were suppose to get a really good snowfall, but I can still see the darn ugly, dead grass in my front yard, and that is just not enough snow for me. LOL........it did look pretty falling, but just not as much as the weather man said......they said 4" in some areas of our city......some areas??? How can some areas of our city get 4" and some barely any at all........and then even more areas of our city got 7" apparently I am living on the wrong side of the city! LOL They did cancel school though, and as much complaining as I am doing right now, it was good that they did, the temps and snow did cause some accidents, and the roads are still bad, they are urging residents to stay off of the streets tonight and even closed one area down because it was so bad. AJ is hoping tomorrow will be another snow day. I doubt, but would be nice if they would, since the streets are going to be just as bad with the temps falling into the single digits.

Time for an Update 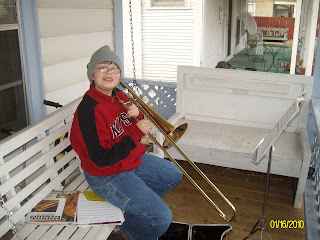 Mr AJ playing his Trombone......he is pretty good at playing it, this is his second year. He is doing good in school, they had Friday off because we got a lot of snow........it was pretty and I had already made up my mind that if we did get the snow they were talking about, I would keep him home from school. Friday he had a friend come to have a sleepover, and I actually had to get out and drive in the snow, which I don't really like, there had already been two accidents right out in front of our house. Luckily nothing major though. 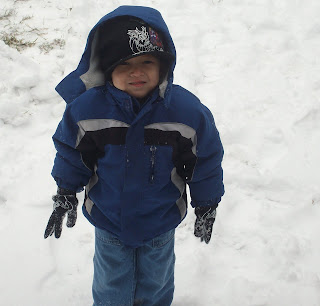 This was actually taken today, we tried to build a snowman, but the snow would not stick...so The boys had a snowball fight.........This is my little Aiden. 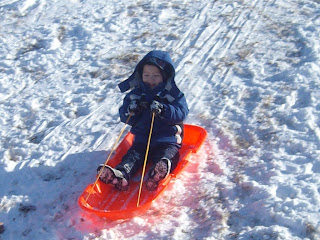 Now Saturday we went sledding........and it was a lot of fun, This is Aiden going down the hill, he would act like he was riding a horse!! LOL it was cute....he would come to a stop then pull that rope, going, "giddyup" LOL it was a blast. 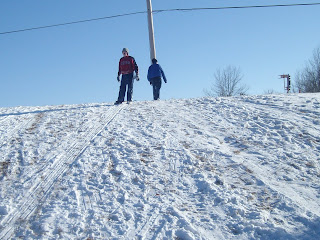 AJ and Chris playing king of the mountain I guess. LOL....... 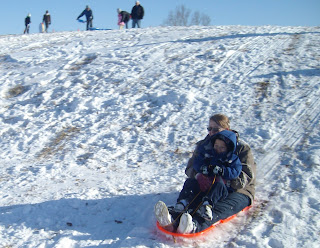 Aiden and I coming down......we didn't flip that time, but on the smaller sled we had, we would flip over a couple of times, and that was a lot of fun, I made sure to hold on to Aiden, and we came up laughing.

On the crochet front, this is one of the Dragonfly scarves I desinged, this one is called, "The Warmth of Dragonflies" and I used a Caron Simply Soft in Soft pink and it came out gorgeous. I really love this color.....I am also making the other one I designed in the same color/yarn. 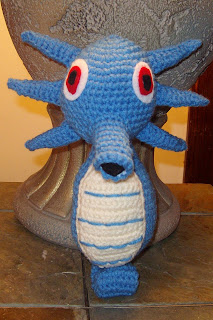 Pokemon Horsea I made 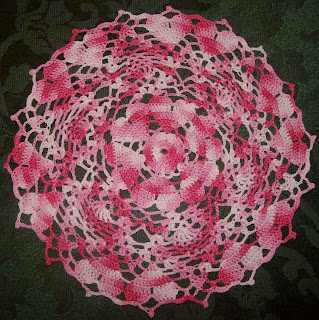 Hearts around doily I did for a swap box. 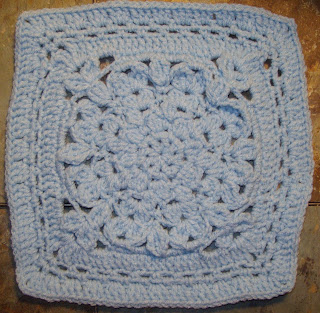 From Aprils Calendar ghan CAL this one is Novembers, "Mum's the Word" but looking at it and hers makes me think I goofed on it, but I am not going to redo it...... 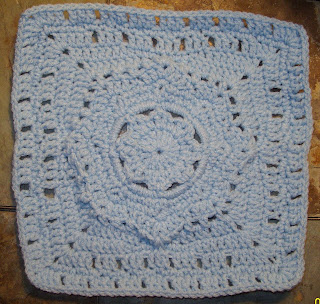 This one is called Decembers, Mistletoe, I made all 12 months in this light blue, and will put them together, then add more around them in a Soft Navy.......then I will do 12 more of her squares in a Soft Navy and do the outer edge in the light blue. These will be made for the boys. I will try to get busy with that this week. I am trying to avoid swaps and stuff, so I can concentrate on getting them done, and my dad is wanting an afghan as well.