Update on my Boys

Last week the boys went to a Taekwondo tournament. They have been doing TKD for a few months now, so for them to be there and do so well was a really proud moment. I was so nervous for Aiden, AJ I knew would do well, and I knew he was nervous, but he is older and had done stuff like this before. Aiden on the other hand is shy in public, and has never done anything like this. It started with Baseform competition. They were brought before the judges in pairs. Aiden was with another kid slightly older than him. But he rocked!! He did so amazingly well in his Base Form. Even though they went before the judges with another person, they were judged in a group of 4-5..Aiden got 2nd place out of 5 kids in and around his age. I was so proud, and when he got his medal, I cried! Yep I sure did!!! He was so happy too. Then AJ eventually went, since he was older, he was pretty much last. I think the girl he went up against, was one year younger than him. He placed 1st place in the Base Form, I was so proud of him too, he did really well. Then after that it was sparring......Aiden said no he didn't want to try......but after seeing kids get 'geared" up in padding and such, he changed his mind. He needed a mouth guard which we didn't have for him....so a friend and I drove to Wal-Mart, I ran through the store to buy one, and we made it back in time, so I got Aiden in his gear, and he went up against another kid his age. I think he might have been 7, so a year older....anyway they looked like tired little boxers!! But I was so amazed at how well they both did. Aiden was nervous at first. They did 2 one minute rounds.....and guess what??? Aiden took 1st place!!! I was so proud of him. He got his trophy! AJ took 2nd place in sparring. He went up against a girl.........you could tell he was super nervous!!! I had always taught him to never hit a girl, and I think that might have registered with him at that moment. He did well in his 2nd round though, I think by that time he knew he needed to do what he had to. So anyway this was my brag moment!!! I do love them......LOL
Posted by Dragonflymomof2 No comments: 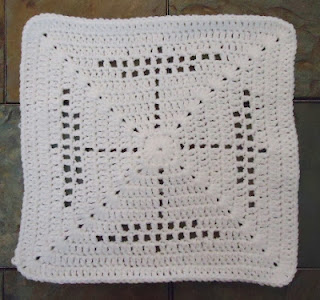 This is the first square for the, "Dragonfly Days" lapghan that I am offering as a prize in my yahoo group.  For more info, see link below

Don't worry though, I am going to be running a contest of sorts in the future and the prize will be a lapghan as well.  So be on the lookout for that.