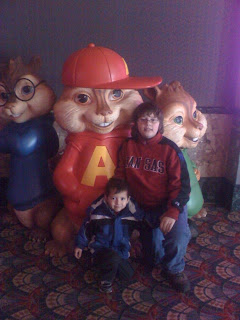 Saturday I took the boys to see, "Alvin and the Chipmunks", a very cute movie, it has been awhile since we took Aiden with us, the last time we tried to see a movie, he was just too talkative and fidgety, which he was younger, so was to be expected. Anyway he did good in this movie, he doesn't like all the previews you have to watch before the movie, but he liked the popcorn and candy he got.........we all loved the movie, it was too cute. We also had lunch before the movie, and after the movie I took AJ over to a friends. I had a talk with the mom about some things her very young daughter had been saying......I picked up AJ later that night, and after being harassed by this very young girl today.....I think I will just sever ties with this family. I don't need their drama.......LOL I have enough of my own. Sunday I took AJ and a couple of kids to the YMCA to go swimming, I didn't work out, since AJ just wanted me to swim. Had fun though. 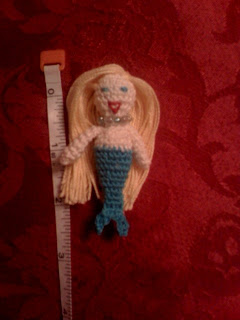 I did this mermaid in thread for a lady in a group with me, she wanted this as a wish, so I made it for her and got it mailed today. This worked up super fast, I think it only took about an hour to make if that. I didn't want to part with her, but then I have that problem a lot with stuff. LOL

So the movie was really good? I been wondering if I should see it.

We saw that movie to during one of our snow days. We enjoyed it too. Love the tiny mermaid, what skill to get such detail so small.