Is it Fall yet? 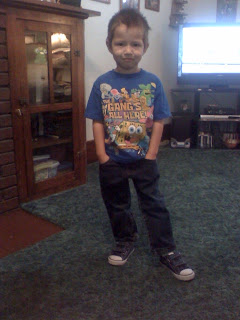 Ok well not yet, but I can hope. It did feel like it today though, it rained this morning, and the wind blew all day, but it was sooo nice and cool outside. My little Aiden is now "Officially" a pre-K student......this was taken today right before heading out the door to school. In my van!! yes you read that right, my van........It is finally fixed, but I don't want to over due my excitement, seeing as how we have gone through the "it's fixed" stage before and it lasted not even 24 hours. We did get home from dropping Aiden off at school, got gas, came home, I turned it off and then back on again, and it would not start, it would try, but not stay running.......BUT......my dad looked at it and my air filter cover was off, only being held on with one bolt, other side was cracked and two bolts were missing. Fixed that and it started right up.

Aiden had a super fun day at school he said.....his teacher said he is very polite and is adjusting really well. I hope that as time goes on, and he gets to know her, and makes friends, that he will not "act" up......he usually doesn't, but you know how kids are when they get to know someone.

I am working on crochet swap stuff.........none are due until the end of next month, but I want to get them out early. I really need to get busy with my own stuff........I have another design to work on.......one is Christmas related and not a square! LOL......the other is amigurumi related and actually Halloween. I started on it, but it is proving to be one of those, "hair pulling moments." So just finished a Fall towel topper and fall fridgie for a swap, just started on the Fall Amigurumi swap, and then it will be time to mail it off along with some wishes.

I changed my blogger background, found another blog that offers them, and I had a very hard time choosing one.....I wanted a fall one, but thought that might be jumping the gun just a bit. Who knows you might come back and I will have a Fall background. Hmmm....when does Fall officially start? Autumn begins the 22nd of September.
Posted by Dragonflymom

Love your blog... but fall?? goodness, where i am were still waiting for spring.. shouldn't be too far away, i hope... :)

I love the new blog background! That was the first thing I thought when I pulled up your blog today! Looks great! Way to go Aiden, and how is AJ liking school this year so far? Thumbs up on the van working - and I hope that continues indefinitely!! :) Hugs!