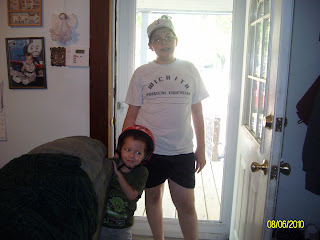 Here are my handsome boys getting ready to go bike riding, they rode their bikes with papa to the library to return books and check out some more. Which Aiden carries around most of the day. LOL 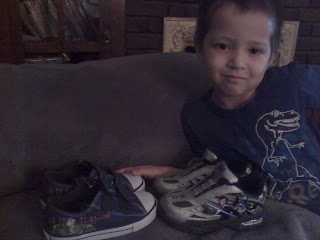 My little Aiden will be starting pre-kindergarten this month.....I am glad I called our local school. they told me he has to be pre-tested and pre-approved to attend...and it will be a school of the boards choice since a lot of schools fill up with pre-k fast........man I sure wish I would have known that earlier.....so I called the number, and got an appt the next morning.......took him in. They told me a letter would be mailed to me letting me know if he was approved and at what school. Anyway last week I get a call from an elementary school telling me he was approved and could I come that moment to sign some papers.........wow I never got a letter, but we got him signed up, and already have a full month of appts........they will come to our house tomorrow to officially welcome Aiden........then later this week, open house, parents conferences the next week, so he can see his classroom one on one with teacher.......then a "practice" day, and then he officially starts last week of this month, a week after AJ does. I took him to get his feet sized and bought him two pairs of shoes, you can see them barely in the picture above, He picked out the Star Wars, and I found the Toy Story ones. HE loves them, carried them all over.........I then took him to walmart and got him a few shirts, he has plenty of shorts and jeans still....but he found some dragon shirts, and buzz light year.....and promptly pointed out a thomas the tank shirt saying he doesn't play with Thomas trains anymore. LOL It was off to Dillions to mail some packages and get a few things on sale there......then home.

Today was another busy day......I had to take Aiden in for blood work, he has another echo-cardiogram Wednesday, then went to get some uniforms for AJ......lunch, then home.....it was just too hot today to do anymore. I hate this heat

I am slowing down with crochet..........didn't crochet the past 3 days, my right hand felt like something "snapped" in the top of it...and for a full day that just hurt really bad, not as bad now, but when I do some things it flares up.......but I did manage to work on some squares. I have another new flower one 6" it is being tested, then I will post it.
Posted by Dragonflymom