I have been able to finally get some crocheting done, I had to catch up on some stuff I was behind in.......I had to do a kitchen swap that is due this month and hadn't started on that, but the last two nights, I have been able to get quite a bit done for it, can't post pictures yet. 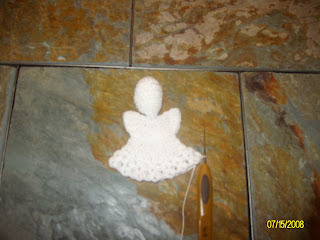 I can post this picture, which is the starting on an angel done in thread with a size 8 hook.....she is not even half way done.......but this is the first 13 rounds done I think.....not sure....but I am doing her for a buddy swap, this will go to Kairi in France......our theme this month is angels......I am hoping she will like this one.......I had to restart this one as the first one got sucked up in vacuum, last time I leave the thread hanging down. LOL 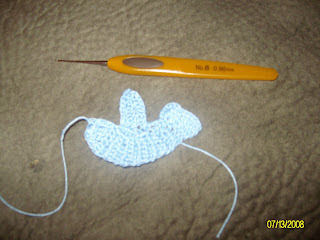 I started this the other night as well, its going to be a bird fridgie.....done in light blue. 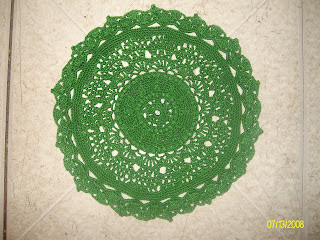 I also did my second doily, this one is a small one, only about 8" or so......I did this one for a Wish Swap, and will send it with the rest of her swap stuff. I will post pictures of the whole package once its send and received by her.

I will work some more on the angel, I have gotten to round 20 of her, but wanted to take a break and play with Aiden and get some stuff picked up.