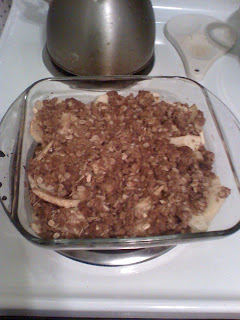 I had my father peel and cut some apples, I didn't want them to spoil.......we didn't make an apple pie for Thanksgiving, because I had already made pumpkin and blueberry pies. So he did, and we had alot of apples......so I had enough to make apple pie and an Apple Crisp, which I absolutely love!! AJ helped me with both, he crinkled up the edges of the pie, and cut the slits.....he even indented happy faces, not sure they came out in the picture, but I thought that was cute. Anyway we just took out the apple crisp, and it smells so good. Will have that tonight with some cool whip. If you are feeling adventurous and want to create a different kind of apple pie, culinary classes at online universities should also be able to teach you the Top 10 apple pie recipes.

I started on AJ's Pokemon Mew today........got the head and body done.......will try to finish him up tonight.........I also want to start on Luigi for Aiden, and Woodstock from Charlie brown........I will do Woodstock in thread, he was my favorite character!!!

Well AJ is back to school tomorrow, and hopefully we can all get back on a better schedule.........I would like to say things will slow down, but then I remember that Christmas is right around the corner. 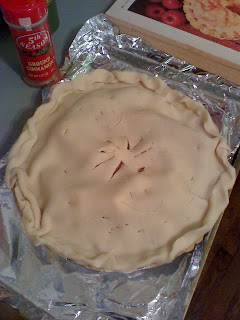 Apple Pie that AJ helped me with. This was before it was cooked.
Posted by Dragonflymom