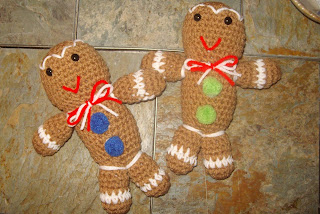 I did these Gingerbread boys last week I think.....they came out really cute, I used the Lion Brand pattern which you can find HERE. The boys like them 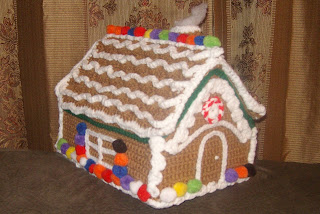 I also finished this Gingerbread house today. I started it back in October, and had it all done a few weeks back, well not all done, the box was put together, all "house" walls and roof were put on..........I did the trimmings today..........I think it came out really cute, and actually worked up fairly quickly, I didn't like cutting the box........that part was no fun at all, and even with it done and glued together, I still have to "trim" 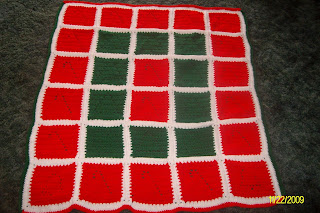 This is the afghan I was doing for a friend of mine online.............I had sewn on the last strip upside down and had already added a border...........well I finally decided to fix it, so the border actually came off fairly easy, and I was able to get the last strip off without cutting into the border of the squares...........anyway you can't really tell in the picture, but it has a white border, then I added a second border, two sides in red, and two sides in green. 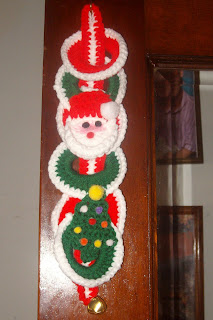 I made this Santa door hanger, I did two of them, one will be sent off to someone.........the pattern can be found HERE. It called for two Santa faces, but I did the Tree one instead of the second face. Now that I look at the patten, I did mine wrong.......I only printed out the actual pattern and not the pictures. :( oh well,
Posted by Dragonflymom

You sure are energetic. I love the gingerbread dolls. They are too precious. And wow on that house too!

The house is super awesome! The dolls are great too. What a lucky friend to get that afghan. I'm glad it wasn't too much trouble to fix it.

All your projects are incredible. What a lot of time and work the gingerbread hose must have taken. The door hanger is darling, might have to look that one up!!! Have a a Happy Thanksgiving with the guys!

The house is so cute. And so are the gingerbread boys. :o)