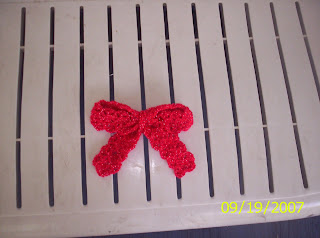 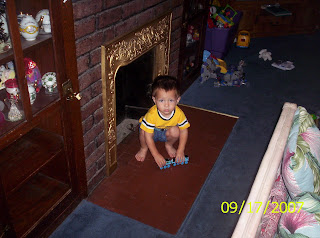 This is my rotten Aiden playing with his Thomas the Tank Trains, I called the company, and none of the trains we have are from the recall, so that was a great relief! 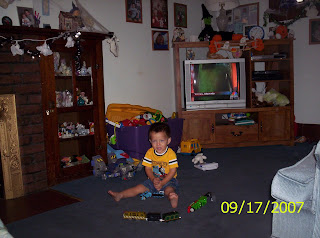 Another shot of him playing, this is so cute and hopefully the pic will clear up. I love how he pooches out his little lips and goes "choo choo" omg he is just too cute!!! He is such a cutey! 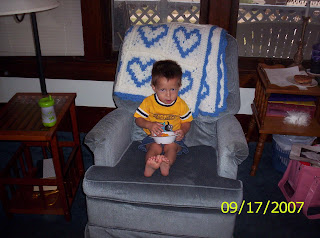 Aiden having a little snack! I think this was hot dogs and fishy crackers! He loved being able to sit in the chair and eat!

I took some more pictures with my camera today while the boys were outside playing, and will post them tomorrow. I was waiting to take more in the morning of AJ in his soccer uniform, but the coach called saying the game has been cancelled again............it had been rescheduled from 9am to 1:30 because the other coach could not get players to commit to playing at the first time, and also could not get them to commit to the afternoon game.........I don't know why they bother to sign up. Anyway so Aj is going with Brett to a football game..........Aj is getting into football now.

Anyway our week went well....AJ is doing really good in school.......last week he got 100% on his spelling test and today he only missed one........he brought home some work that had been graded and got 100% on some math!!!! OMG I am just so proud of him, he is really working hard this year so far and I just hope he continues! AJ had a music program yesterday and they kids did a great job and sounded really good, I was not able to get any pictures because Aiden would not let me, he wanted the camera............and I really need to get another one, I found a pink one for only 60 dollars...........which would be fine for me...........the one i have now the batteries keep falling out.

Anyway I really need to get offline and relax, which is what I wanted to do, but my father is watching wrestling, mom is in the bedroom watching tv, and AJ is playing with Jesse in his room, so I don't have anything to do..........unless i want to go watch wrestling............i use to watch it a long time ago, but it just kept getting more stupid with each show

Your little guys is so cute!!