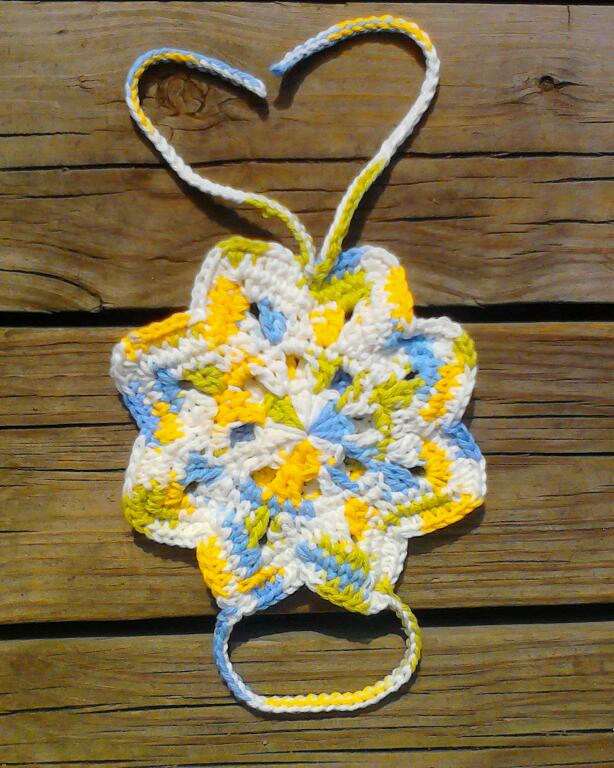 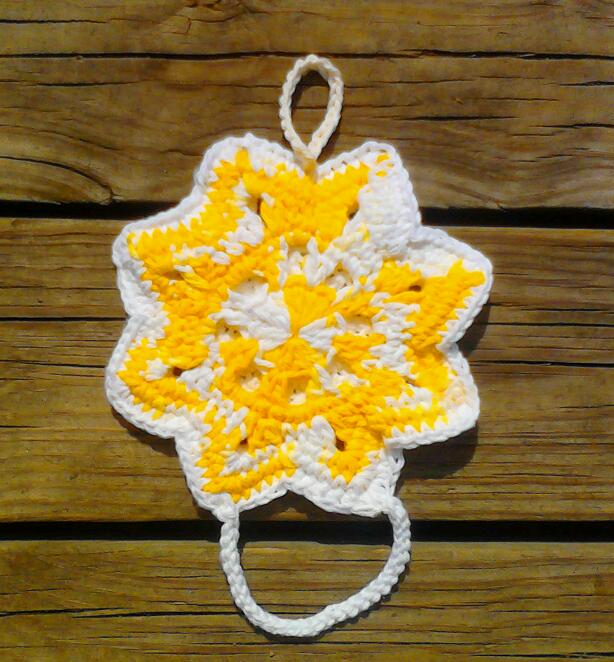 G Hook & Type of yarn you prefer to use

Rnd 6: Repeat rnd 6 of Front.  DO NOT FO IF you are using the same color for your border that you did your back in.  Then follow the directions below.

Loosely SS into ch sp (tip). Ch1 and turn.  Put front and back wrong sides together, with the front facing you, and working through both pieces, 3SC in the same tip space.  then follow the pattern below:

To make towel hanger loop, Ch30 Turn (so that the back is facing you and in the next tip, SS in middle sc of tip. Ch1 turn work again, and SS in each ch across the chain.  SS in top of the SC.  (Where you started the ch30).  Then continue with your border in the follow pattern:

Hanging tie as seen at the beginning of pattern (Left Picture):

With the front/top facing you, and towel hanger loop at the bottom.  Join yarn with a SS in the SC to the right of the middle Slip stitch.  *Ch 30, then SS down the ch.  SS in the same sc you originally started the ch in*  SS in the next ss, SS in the next SC. (the one to the left of the middle ss).  Then repeat ** once.  SS in next sc, and FO.  Weave in ends.

For the Loop hanger:

With the top/front facing you, and towel hanger at the bottom.  SS in the middle SS, and Ch 20 (You can chain as many as you want, depending on how big you want your loop to be.) Then SS in the same ss you started in.  FO. Weave in ends.

© 2011 Aurora Suominen. All rights reserved. This pattern may not be sold, reprinted  posted/copied, or electronically transmitted to any website without the written consent of the copyright owner. You may link to this pattern if you like, or print a copy of it for your personal use ONLY.